Free shipping and processing on all orders over $100!
Welcome!
Set of 7 titles 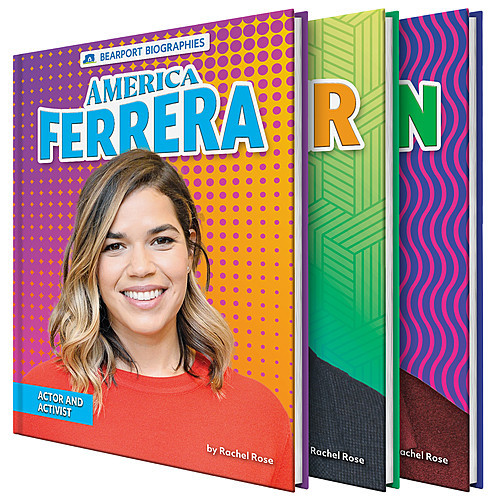 Ever wonder what inspired your favorite role model to rise to the top? This series introduces readers to some of the most inspiring people in recent times. Young people will learn about the lives and accomplishments of amazing people who reached for the stars and never gave up on their dreams. Each book contains information on the early lives of these role models as well as the inspirations and struggles they faced on their journeys to reach their goals.

One positive aspect of this book is that it focuses on Michelle Obama’s life broadly, not just in her role as US First Lady. Readers learn about her “Humble Beginnings,” growing up in a home where she had to sleep in the living room, separated by a hanging sheet from her brother’s bed. They learn how she went on to academic and professional success before meeting Barack Obama. A timeline is included, as well as a glossary, index, and link to online resources. This is part of an eclectic six-book series that includes books on America Ferrera, Christina Koch, Jimmy Carter, John Lewis, and Michael Jordan.

These six volumes provide an eclectic mix of notable personages. Each book begins with a description of a significant moment in the subject’s life: Michael Jordan winning the 1991 NBA championship, Jimmy Carter’s acceptance of the Nobel Peace Prize, John Lewis’ speech at the 1963 March on Washington, etc. Then readers learn about when and where each person was born and where they attended college. Careers are traced with an emphasis on big moments: Christina Koch was a part of the first all-female spacewalk team, America Ferrera achieved success as an actress, and Michelle Obama promoted projects as first lady, including her “Let’s Move!” initiative. Nice, colorful photographs complement the texts. None of these biographies particularly stands out, however, and most of these luminaries are the subjects of numerous other books for kids. Still, the information is current, and those needing up-to-date biographies on these individuals will find them useful. VERDICT Standard biographical fare, these volumes will be of value to libraries that maintain current information on the subjects and should be considered based on demand.