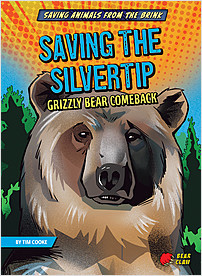 This graphic nonfiction title by Tim Cooke is an engaging and informative look at how biologists and brothers, John and Frank Craighead, spearheaded the movement to protect grizzly bears in the United States.

The narrative follows the brothers’ grizzly bear research and advocacy to protect grizzly populations in the United States. The graphic narrative is followed by grizzly bear facts and information regarding other endangered bear populations. Back matter includes a glossary, index, and suggestions for further reading.