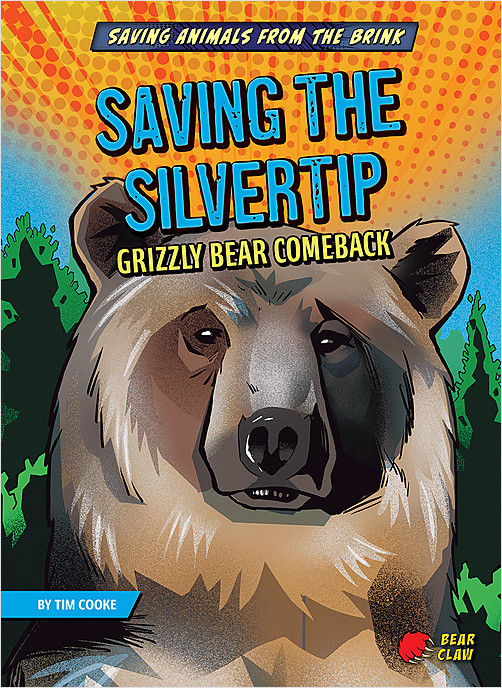 Brothers John and Frank Craighill knew there was a problem when they saw fewer and fewer grizzly bears at Yellowstone National Park. But how did grizzlies--with a population size once as big as 100,000--wind up on the endangered species list? Follow along in this graphic adventure based on a true story of how the Craighill brothers learned all they could about these beautiful bears in order to save the silvertip. Then, learn more about grizzlies and other bears in danger.

This graphic nonfiction title by Tim Cooke is an engaging and informative look at how biologists and brothers, John and Frank Craighead, spearheaded the movement to protect grizzly bears in the United States.

The narrative follows the brothers’ grizzly bear research and advocacy to protect grizzly populations in the United States. The graphic narrative is followed by grizzly bear facts and information regarding other endangered bear populations. Back matter includes a glossary, index, and suggestions for further reading.

SLJ Review of Saving Animals from the Brink

A new take on science comics that feature groups of conservationists and activists working to help save animals from extinction. This series is tied together with the shared thread of animals at risk and their connection to the creation of the Endangered Species Act. Each title addresses the critical importance of the selected species, using key terms like “apex predator” and “keystone species” to impress the importance of the animals upon readers. While the work done by the conservationists is inspirational, there is some dancing around issues, as each narrative begins at the onset of colonialism or expansionism without really addressing the issue in a decolonized way. Also, A Chemical Nightmare leaves out the major factor in DDT’s removal–Rachel Carson’s Silent Spring and its public impact, which was inspired by Charles Broley’s research. VERDICT: Using science comics and simplified narratives, this series aims to discuss topical issues of extinction and conservation with reluctant readers.